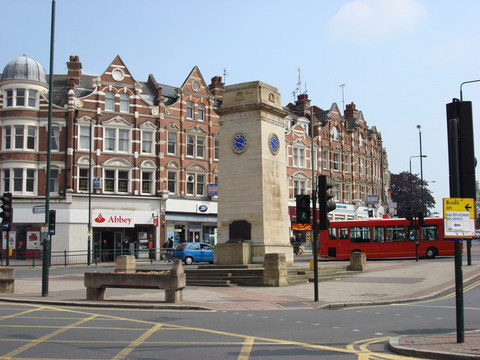 Read all about Golders Green (and give us your views):

Location. Where is Golders Green?;
Golders Green is a suburb in north west London situated some 5.5 miles north of the centre of London.
It encompasses also the areas known as Temple Fortune and Hampstead Garden Suburb.
It is bounded by Brent Cross and Hendon to the north west, Finchley Central to the north, East Finchley to the east, Cricklewood and Child's Hill to the west and Hampstead to the south.
Copyright 2005 Simon Morrow. All rights reserved

Golders Green Tube station (Zone 3) is located in the heart of Golders Green on North End Road,close to the junction of Finchley Road and Golders Green Road. It is served by the Edgware branch of the Northern line with fast services into Central London via Euston and into the City (Liverpool Street) via Kings Cross.

The bus and coach station is located just outside the tube station. All National Express coaches travelling north, including to Luton and Stanstead airports, stop here. It is also the terminus for many bus routes.

Night buses N5 and N13 connect to the West End from Trafalgar Square and Aldwych respectively.


For route details see;
Bus Route Map (Use your browser back arrow to return to this page)
Premier residential areas in Golders Green
The most exclusive residential area in Golders Green 'proper' is the Golders Hill Park estate. This lies between North End Road and Golders Hill Park. This area contains large detached house, the latter exclusively with attached garages and own drives. Many of the detached houses come with imposing carriage drives.

Other fine areas lie between Golders Green Road and Finchley Road, within walking distance of Golders Green tube station - roads such as Hodford Road, The Ridgeway, The Vale. Sought after are also areas off Golders Green Road to the north, for example Princess Park Avenue, while Temple Fortune and Hampstead Garden Suburb at the northern and western extremities of 'greater' Golders Green have a charm and character of their own.

Although often classified as separate districts in their own rights, these two areas, not possessing a tube station, are combined within the overall term 'Golders Green' in the lay public's perception.

Property Prices in Golders Green
Given its excellent transportation links to Central London and the high standard
of its locality, Golders Green is considered a prime suburban location of 'near'
north west London. Properties therefore command a premium in price.

The top end of the market off North End Road would have houses in the &pound;1.5 to &pound;2.5 million bracket, whereas parts of Hampstead Garden Suburb fetch in the &pound;4 million range.

Copyright 2005 Simon Morrow. All rights reserved
Shopping in Golders Green
The main shopping centres are located on Golders Green Road and on Finchley Road.
Here one can find all the 4 main clearing banks, Barclays,HSBC, Lloyds and Natwest, plus the building societies Abbey, Halifax and Nationwide.

For major food shopping there are Waitrose and Tesco stores on Finchley Road,
Eurofoods on Golders Green Road. Maysun Chinese Supermarket, as the name suggests,
caters for chinese groceries.

There is a Rymans and a Boots Chemists on Golders Green Road. There are a range of smaller grocery, vegetable and Kosher butcher shops, reflecting the ethnic make-up of Golders Green, as well as specialist shops (mobile phones, electrical goods, launderettes, etc).

Around 1827 Finchley Road was built and replaced Ducsetters Lane as the main
connection to Finchley. The 'Green' in Golders Green was a strip of waste land
on either side of Golders Green Road. The first recorded dwellings were in Hendon Park Row, which exists today, in the 1860s and were built by a George Stevens. A small dame school (an early form of private elementary school where children were taught in the home of the lady teacher) and prayer house run by Anglican Deaconesses existed in the 1890s and 1900s, and this later became St Barnabas (1915). By the end of the 19th century there were around 300 people living in the area, which included a laundry and a small hospital for children with skin diseases. The principal industry was brick making.

The Jewish Cemetry was established in 1895. The Crematorium was built in 1905. But
the major impetus to the area's development came with the establishment of
Golders Green tube station in 1907. Houses started being built in Hampstead Garden Suburb in 1913. The Golders Green Hippodrome, former home of the BBC Concert Orchestra, and the Police Station were both opened in 1913. St Edward the Confessor, a Roman Catholic church, was built in 1916. By 1911 the population had grown to 4,465, and by 1931 it had reached 17,837.

Copyright 2005 Simon Morrow. All rights reserved
Famous people and places associated with Golders Green
The Aida Foster School of Drama (1939 to 1969) on Finchley Road had some notable alumni, including Barbara Windsor, Elizabeth Taylor and Jean Simmons.

Pete Ham, guitarist/vocalist with the group Badfinger lived for a while at 7 Park Avenue, off North End Road.

Harold Abrahams, of the 1981 film Chariots of Fire, lived at Hodford Lodge, 2 Hodford Road (Now known as White Lodge), from 1923 to 1930, years in which he achieved great success including his famous 1924 Olympics win in Paris for the 100m sprint. A Blue Plaque of the English Heritage now adorns the front of his former home.

Desmond Tutu was curate at St Alban's church in the early 1960s, and Oliver Postgate, the children's programme maker, was at school here. Golders Green's most famous Rabbi has been Rabbi Sacks, the current Chief Rabbi of Great Britain and the Commonwealth.

Copyright 2005 Simon Morrow. All rights reserved
Inhabitants. Who lives in Golders Green?
Like most of London, Golders Green is a cosmopolitan area but it is for the size and strength of its Jewish community that it is predominatly known. It has arguably the largest and most concentrated Jewish population in the UK.

Although there had been Jews in Britain since Roman times, this stay was
interrupted with the expulsion by King Edward I in 1290 until the readmission by Oliver Cromwell in 1655. However, large scale immigration only started after 1880 resulting from persecution in Eastern Europe. The new arrivals settled initially in the East End of London but then gradually moved out to more salubrious parts of the city, settling in Golders Green in the 1910s and 1920s.

Now with a vibrant Jewish community inspiring a 'European' cosmopolitan society,
Golders Green has become an upmarket area attracting the higher echelons of London
residents and highly sought after by the mid tiers of the diplomatic corps - those who cannot afford to reside in Belgravia or Knightsbridge.

Copyright 2005 Simon Morrow. All rights reserved
- Link to this page
- Tell us what you think of Golders Green (and link to us)

Link to this web page
If you have your own webste or blog why not link to this web page?
You will find the information here will be regularly updated and expanded.
Simply copy the following script and paste it into your html code at a suitable place:

Back to Contents; Back to Top

Tell us what you think of Golders Green:Back to Contents
Back to Top