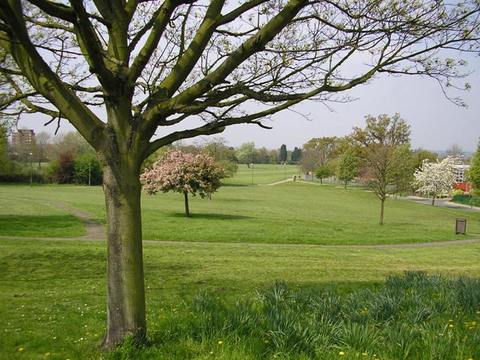 Read all about Kingsbury (and give us your views):

Location. Where is Kingsbury?;
Kingsbury is a suburb in north west London situated some 10 miles north of the centre of London. It is bounded by Wembley Park to the south, Kenton to the west, Queensbury to the north and Colindale to the east. Not to be confused with
Kingsbury in Warwickshire!
Multimap;
multimap (Use your browser back arrow to return to this page)
Postcode of Kingsbury;
NW9
Council Tax rates;
London Borough of Brent: Council Tax (Use your browser back arrow to return to this page)
Transport Links;
Kingsbury Tube station (Zone 4), located on Kingsbury High Road, is served by the Jubilee line with fast services into Central London (Bond Street) and beyond to Docklands and East London. Buses also enable the use of Wembley Park (Metropolitan line), Kenton (Bakerloo line), Colindale (northern line) in case of problems or delays with the Jubilee line.

For route details see;
Bus Route Map (Use your browser back arrow to return to this page)
Premier residential areas in Kingsbury
Property Prices in Kingsbury
Shopping in Kingsbury
The main shopping centre is located on Kingsbury High Road. Here one can find all the 4 main clearing banks, Barclays, HSBC, Lloyds and Natwest, plus the building societies Abbey, Halifax and Nationwide.

For major food shopping there is Iceland at the roundabout as well as a Morrison Superstore (the former Safeway) a few minutes' walk up Honeypot Lane. A bit further away on the Capitol Way estate off Stag Lane there is an Asda Superstore, although this is strictly considered Colindale.

An Aldi is located on the High Road but some adverse comments have been noted as to both the quality and the service at this particular store. The concensus is that Morrisons offers superb value, an extensive range of products and very friendly service. Certainly well worth the extra few minutes walk. Iceland also has excellent service and good staple products such as bread, milk, etc, but the range could be extended. For those looking for sugar-free products Morrisons has more to offer.

A Woolworths is still open as is a Boots Chemists. There are a range of smaller grocery, vegetable and Halal butcher shops, reflecting the ethnic make-up of Kingsbury, as well as specialist shops (mobile phones, electrical goods, launderettes, etc).

A B&Q Superstore is on Honeypot Lane and a Wickes DIY store off Stag Lane.

A secondary shopping centre can be found on Church Lane.
Copyright 2006 Simon Morrow. All rights reserved

Secondary schools: Kingsbury High School (divided into a junior school and a senior school), Jewish Free School (JFS).
Copyright 2006 Simon Morrow. All rights reserved
Parks and Recreation areas in Kingsbury
Residents say that the most attractive aspect of living in Kingsbury is the wonderful parks and open spaces, which give Kingsbury a really country feel.

Roe Green Park is a wonder to behold if one goes for an early morning jog or a walk. So serene and peaceful yet bang in the middle of town. Then there is the Silver Jubilee Park blending into the West Hendon Playing Fields housing the Welsh Harp Reservoir with its sailing base, although strictly speaking this must be considered a part of West Hendon rather than Kingsbury, belonging, as it does, to the London Borough of Barnet, rather than to Brent, although both share a NW9 postcode.

But the <i>piece de resistance</i> must surely be Fryent Country Park and Nature Reserve with its 500 odd acres of rolling hills on one side of Fryent Way and woodlands on the other, home to many animal species, including foxes. Unspoilt countryside in a London suburb!
Copyright 2006 Simon Morrow. All rights reserved
Things to do in Kingsbury
Kingsbury is reasonably well endowed with bars, pubs and restaurants. Nandos at the end of the High Road is always popular across the whole ethnic divide and there is often a waiting period before a table can be alloted. There are a large number of ethnic vegetarian and kebab restaurants as well as the usual Subway and Pizza Hut. Regrettably a Macdonalds on the High Road, ever popular with families with young children, has now given way to an American style honky tonk bar!

The Green Man is a well established pub on Old Kenton Lane and on the High Road there are the Moon and Hennessys pubs. Sadly, the Prince of Wales at the roundabout has been pulled down and will be replaced by a Tesco Metro with flats on top. Church Lane also houses a number of pubs.

Finally, there is the ultimate fall-back of the West End, with Bond Street only a 30 minute tube ride away from Kingsbury High Road!
Copyright 2006 Simon Morrow. All rights reserved
Places of Worship in Kingsbury
There are two Church of England churches, Holy Innocents on Kingsbury Road and St Andrews at the bottom of Old Church Lane. The latter was transported stone by stone from the West End and rebuilt in Kingsbury in 1931! The Roman Catholic St Sebastian & St Pancras Church is located on Hay Lane.
Copyright 2006 Simon Morrow. All rights reserved
Brief history of Kingsbury
Kingsbury's seeming ordinariness belies an interesting history. Bronze age cremation remains have been found around the Welsh Harp Reservoir and Roman artefacts at various locations. The latter is unsurprising given that the nearby Watling Road in Edgware was a major north-south Roman road.

Definitive records are first found from anglo-saxon times around the 10th century AD when it was known as Cyngesbyrig, meaning the King's stronghold. At the time of the Norman Conquest in 1066 much of Kingsbury belonged to a Saxon thane named Ulward Wit (a thane being a man given land by the king for military service rendered). Reference is made to Kingsbury or 'Kynggesbrig' in the Domesday Book commissioned by William the Conqueror in 1085.

The area was covered in forests but during the middle ages local people began clearing the woodland for cultivation and settlements were founded. Records from 1530 show that a parish church had been established with its own school.

The Black Death of 1349 claimed 13 lives and people abandoned their houses and moved north to the present Kingsbury Green, where over time a trading estate developed. The population gradually increased and in 1900 there were said to be 140 houses in Kingsbury! Farming was the mainstay of the economy drawing in large numbers of workers from Ireland, many of whom settled in the area. A Roman Catholic school was founded in 1865.

The Welsh Harp Reservoir was consructed in the 1830s as a source of fresh water and the area further became a place for entertainment boasting a race course.

Prior to the First World War an aircraft industry developed in and around Kingsbury with well known names such as de Havilland starting here and going on to build aircraft such as the famous Gipsy Moth.
Copyright 2006 Simon Morrow. All rights reserved
Famous people and places associated with Kingsbury
Around the 17th century Kingsbury was a rural area with the majority of the people working the land and living in modest houses but it also contained some imposing villas lived in by well known figures, some of whom gave their names to local places. John Chalkhill was an Elizabethan poet. The writer Oliver Goldsmith ('She Stoops to Conquer' (1773), and 'The Vicar of Wakefield' (1766)) lived at Hyde Farm and was visited by Dr.Johnson, James Boswell and Joshua Reynolds. In 1889 Kingsbury Manor was built as a country retreat for the Duchess of Sutherland and it was also here that in 1929 John Logie Baird received the first television signals from Europe! Amy Johnson and her husband Jim Mollison (after whom Mollison Way in Queensbury might be named?) flew to Australia in the Gipsy Moth built in Kingsbury. The houses in Stag Lane and Roe Green Village were constructed to house the aircraft workers.

As mentioned above, prior to the First World War an aircraft industry started up in Kingsbury and attracted skilled workers from other parts of the country. Up to this point Kingsbury would have had predominantly a homogeneous English population with a sizeable Irish element - basically white, Christian and European.

In the 1930s the first 'outsiders' would have started arriving in Kingsbury. Jews fleeing the pogroms in Eastern Europe and the events in Germany started settling in Kingsbury, perhaps an overspill escaping the high house prices in neighbouring Golders Green and Hendon. By the end of the Second World War Kingsbury would have had a sizeable Jewish population.

The next wave came in the 1970s with the East African Asians fleeing President Idi Amin's Uganda and arriving in the UK thanks to the generosity of Prime Minister Edward Heath. With high birth rates, Kingsbury soon became predominantly an Asian Gujarati enclave and with rapid bollywoodisation residents had to learn to live with fire crackers at Diwali time in October and shops overspilling on to pavements.

The latest additions, since 2004, have been East Europeans arriving after the first expansion of the EU into Central and Eastern Europe. Commentators have noted that this may herald the return of Kingsbury to its European Christian roots, or at least go some way towards redressing the balance.

The exclusive areas around Salmon Street are inhabited for the most part by well-off business people, while the Valley Drive estate can be categorised as housing a sizeable professional class. Other areas of Kingsbury would
have residents of a mixed background.
Copyright 2006 Simon Morrow. All rights reserved
- Link to this page
- Tell us what you think of Kingsbury (and link to us)

Link to this web page
If you have your own webste or blog why not link to this web page?
You will find the information here will be regularly updated and expanded.
Simply copy the following script and paste it into your html code at a suitable place:

Back to Contents; Back to Top

Tell us what you think of Kingsbury:Back to Contents
Back to Top